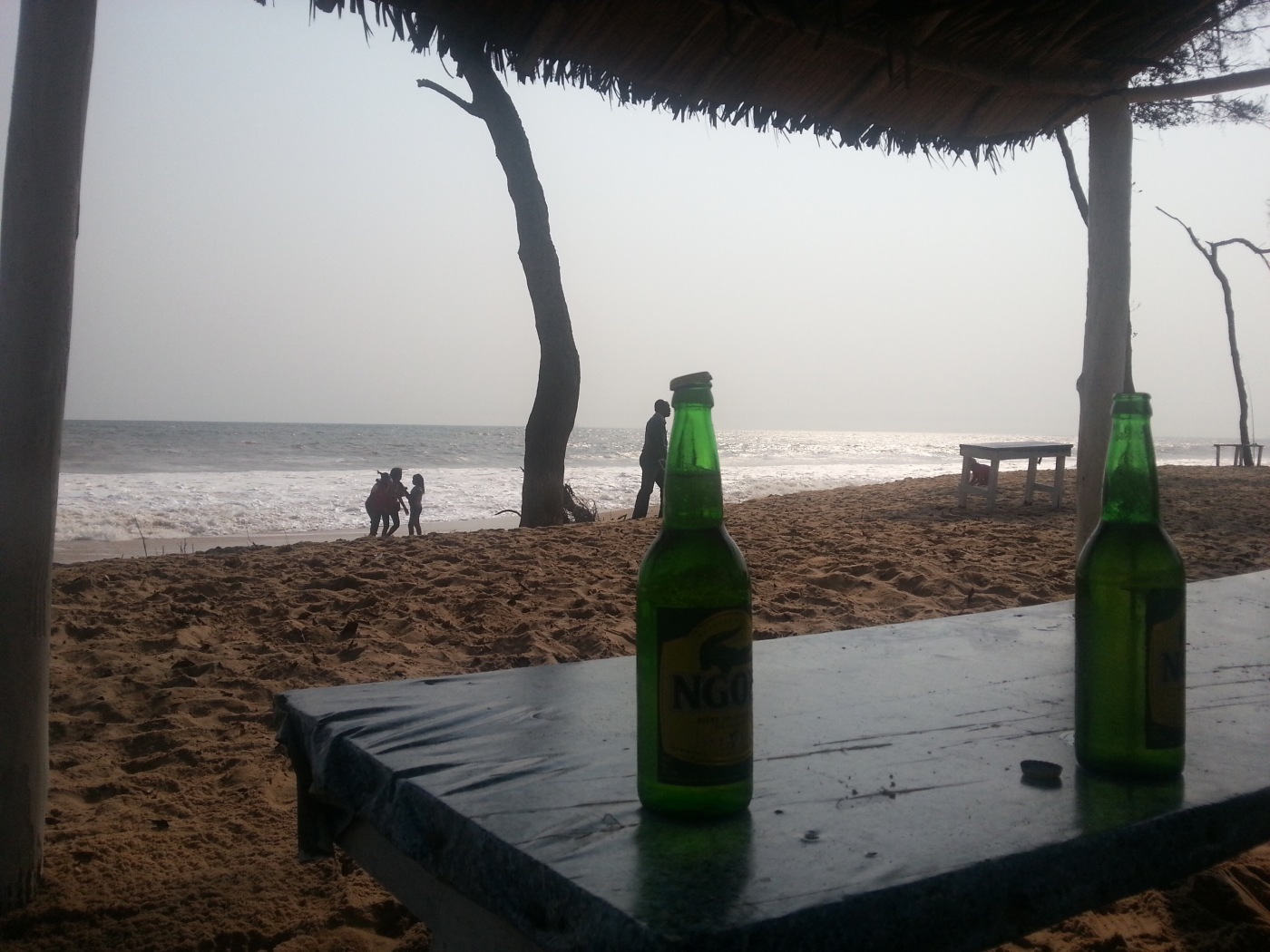 As promised on my facebook I am now finally writing my first blog from the guesthouse of the Jane Goodall Institute in Tchimpounga (Republic of Congo). In this blog I will take you through my journey to Congo, the first experiences and the first trip to the Mandrill release site in the Conkouati-Douli National Park. So let’s start!

Journey
After a bad night of sleeping at my parents house I was ready to start my journey to my beloved Africa again. It seemed like the Dutch railwaysystem already wanted me to get a headstart at the African way of life. No trains between Ede-Wageningen and Utrecht… Which would result in an hour of extra travel time if I decided to continue my journey by train. Thank god my parents were already planning on going to the middle of the country for a visit, so they could take me to Utrecht, however they changed the route midway and decided they will drop me off at Schiphol. After I ride in the dutch rain I was already looking forward to the African sun. I will not bother you with the events during my long flight from Amsterdam – Frankfurt – Addis Abeba – Pointe Noire. Just that whenever anyone has a stopover in Addis Abeba I would advice them to go to the toilet in the airplane instead of the Airport. The state of the toilets come close to that of a roadside public toilets I had to use during a busride from Santa Cruz to Cochabamba (Bolivia) while having a severe foodpoisoning. As you can imagine a very traumatic experience :).

Being sleep-deprived I arrived at Pointe Noire airport. A small airport where instead of smelling the dusty African air I was welcomed by a sea-breeze coming in. I must say I prefer the dust. After filling in the arrival forms and going to baggage pick-up and customs I walked into the arrival hall. Where a lot of taxi drivers were fighting for people to take to town. Luckily I was met by three people from the JGI. Patrick (one of the Mandrill researchers I will replace), Neus (a Spanish woman working as head of logistics at the JGI) and a colleague of her. They told me we were going to do some shopping and I was supposed to get stuff for a week in the forest, since we were already leaving the day after instead of two days later. Not knowing what to buy I randomly got stuff to eat and with some help from Patrick I was ready to go. On to Tchimpounga Animal Sanctuary. Where we would spend the night and early in the morning would leave for the forest. After arriving I couldn’t wait to sleep, so I quickly dove into some pasta Patrick made and afterwards went straight to bed. Only to wake up at 5 in the morning by chimps making a lot of noise. The benefits of being surrouded by chimps…. Both Patrick and me were up early and ready to go. 8 o’clock, no car. 9 o’clock still no car. 10 o’clock guess what? Still nothing. We finally left at 11.30 for a 3 hour drive to the forest. In kilometers it is a drive you can do in 1/1.5 hour. But the quality of the roads here made that impossible.

After a three hour car ride which felt more like a continuous bumpercar ride we arrived at the camp. The place which I need to call home for the coming period. The camp was not much different than the pictures I got from the PhD student working there. So no strange surprises there. After a short round to meet the people in the camp I was allowed to go and check the Mandrill site. With a boat we had a nice 10-15 minute drive over a winding river to the Mandrill cage. Did I arrive in Amazonia or was this still Africa?

After a quick look we went back to allow me to “build” my house for the coming period. With help of Alessandro (the other researcher) I got my tent up quickly and started with the decoration of my house. Where to put the inflatable bed? Where my clothes, books and other equipment? Being scared of the rats eating a way into my tent I decided to keep my food in plastic containers outside of the tent. Just like the others did.

The director arrived later that night since she wanted to check up on the project and discuss current events. Something I won’t be able to talk about due to a confidentiality agreement. However it caused the project to change dramatically and there was only a small place left for me. The days were spend getting to know the Mandrills at the cage (the humans were caged in and not the monkeys) and having nice hikes with Alessandro and Patrick trying to spot a forest elephant (and other wildlife). Going through dense understories filled with Marantaceae. I can’t identify it to species level since I am terrible at botany, something you wouldn’t expect from someone who spend more than two years working in the herbaria of Naturalis (Wageningen en Leiden). I must say I was pretty proud of myself when I identified the correct family 🙂

The stay in the forest lasted longer than expected, so in the end I did not have anything left for breakfast, which resulted in me having to eat pasta or rice as breakfast for several days. When we arrived back in Tchimpounga on saturday whe were forced to eat rice as breakfast for another two days, since there was no car on sunday to Point Noire. Thank god we were saved sunday afternoon by one of the spanish staff members and her boyfriend here. They took us to the beach where we could eat fish and fried banana whilst enjoying a lovely Ngok beer. La bon vie en Afrique!

You are probably wondering why I am adding some french phrases in between all the English text. The manager of the fieldcamp has some catchphrases which we were hearin on a day to day basis: Les bon moments sont rare (the good times are rare), La bon vie en Afrique (the good life in Africa), Les hommes bien (the good guys) and La music blesse (the music hurts). Sorry for my bad writing in French. In the last few months my focus was on understanding spoken french and being able to speak french. The last catchphrase needs some explanation. He was always together with his small radio with Congolese music on it. It would start from the moment he got up until his batteries were dead. So as a protest the others created the phrase and now he is using it as well.
Now back to the title of this chapter. As I wrote on facebook I needed to discuss some things before writing a blog. Due to the changes in the way thte work is done. The only role for me would be to drive the boat, make sure the local staff is working, observe the Mandrills for a short time two times a day when they were feeding at the edge of the river and for the rest of the day spend my time entering data collected by the local staff. Coming from a job where I spend the whole day behind the computer working with data one could say I wasn’t looking forward to this change in plans. So I needed to talk to the director to see what we could do about this. After a long talk we decided that there isn’t much else I could do here and that I needed to decide what I wanted to do. Stay and sit behind the computer the majority of the day (whilst being in the primitive camp) or go home and spend my time trying to find another job. In the end it was a difficult decision, but a good one. I do not want to feel miserable for the 3 coming months so I have decided to come home after I visited the several projects which the JGI has in Congo. The plan now will be that tomorow I am getting my tent and other gear at the Mandrill site and then come back directly to Tchimpounga. Friday I will leave to the islands on the reserve where another project is on its way to release chimps from the sanctuary back into the forest. I will return on tuesday after which I get a tour around the sanctuary and see how they are working here. Then the following saturday (26 september) I will fly back to the Netherlands, where I will arrive on sunday morning around nine. So in the end it is a short stay in Congo of only one month but again it is an experience where I learned a lot as a conservationist and as a person. But I hope the next experiences will finish on a better note. I would like to stress that I will not hold any grudges towards the JGI. I have been active within the JGI since 2009 and know all about the great work they are doing around the world and I also can see the great work they are doing here. But sadly enough there is no place here for me to feel useful and to have a positive impact. Now I will return back to the Netherlands where I will continue my activities with the JGI Netherlands. So Burgers’ Zoo here I come :). And if someone has a nice job for me from October onwards please let me know…

Probably another blog will follow after my experiences on the islands and around Tchimpounga (but most likely not as long as this one). Thanks for reading (if you made it this far) and see you back home!